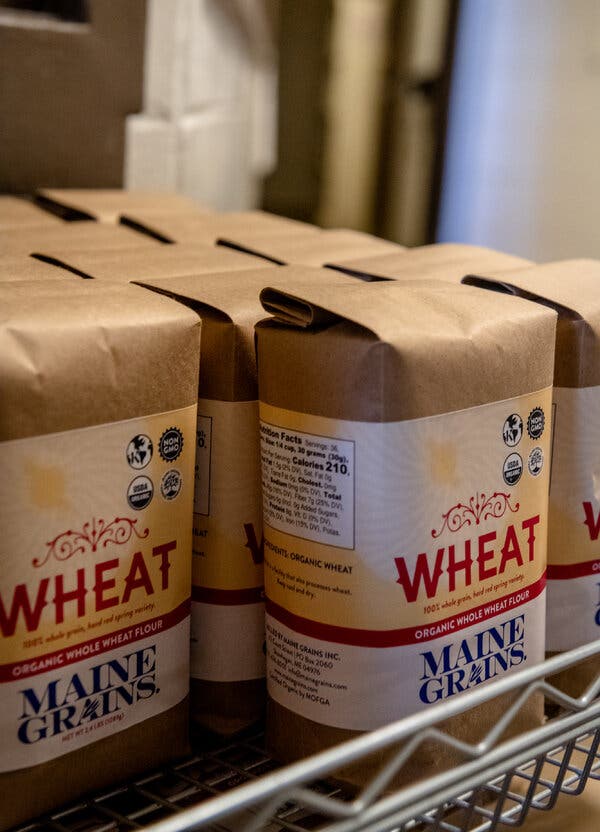 That Flour You Bought Could Be the Future of the U.S. Economy 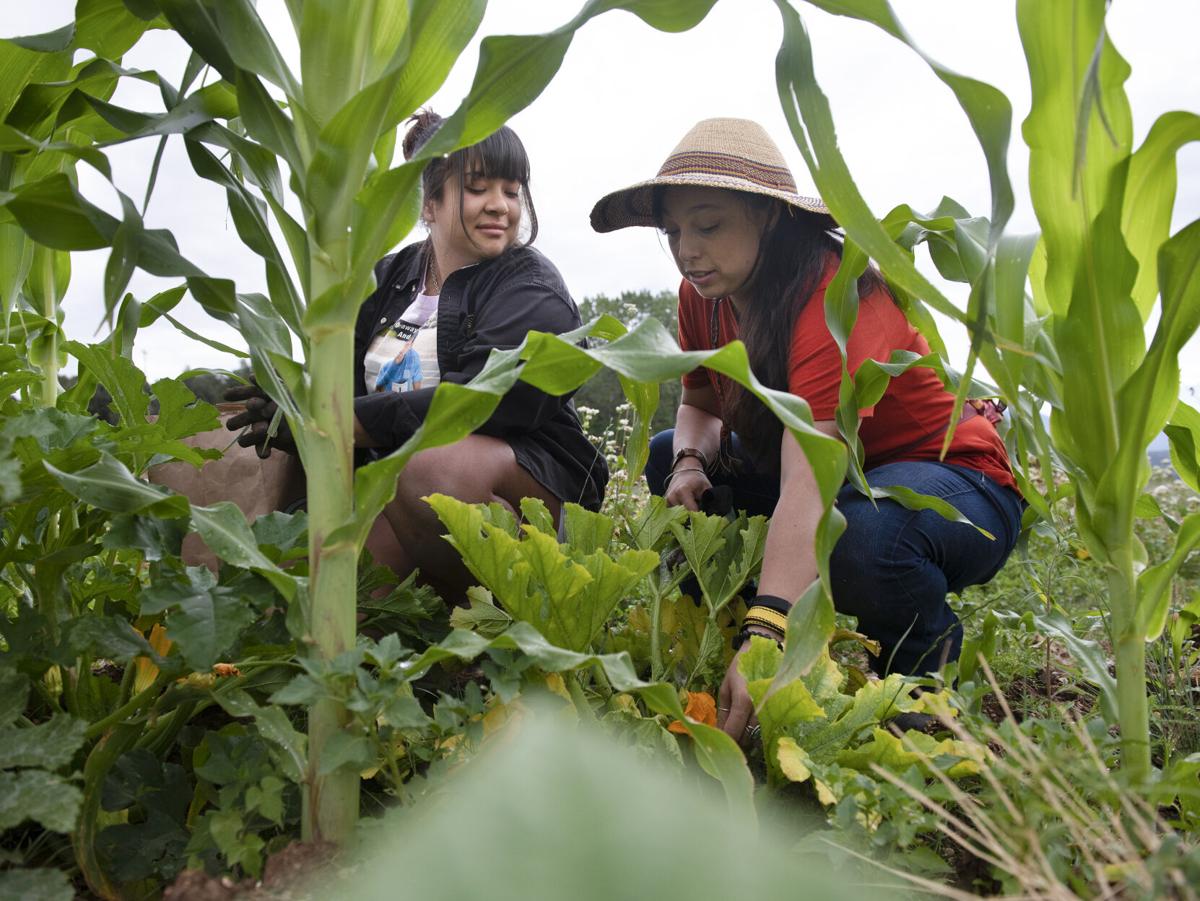 On a hill overlooking the historic agricultural valley of Arroyo Hondo, Corilia Ortega squats to pull weeds among rows of vegetables under the midday sun.

Her nephew, Noah Gonzalez, and her friend, Aimee-Lynn Stearns, 28, are helping nearby amid the plot of potatoes, squash and other crops. Her brother, Nicanor Ortega, 32, walks to a different part of the field to check his peas, corn and beans.

Noah, 6, reaches down to pluck a zucchini.

“What do we say before you pick it?” his 33-year-old aunt gently reminds him.

“I have to give thanks for the beautiful food,” he says.

The Ortegas and Stearns are part of a renewed local food movement that’s been steadily growing across Taos County for a few years. It’s an effort to rebuild a network of farms, livestock producers and markets that once allowed this region to feed itself and bolstered an agricultural economy.

As more farmland is subdivided and lost to development, people are worried about the long-term impact on the region, from the loss of water rights to the end of centuries-old agricultural traditions.

Several of these farmers, like this trio, are young. For some, farming and ranching are traditions that stretch back generations in their families. Others are new to agriculture and are choosing it after years in other careers.

They feel a new urgency to this food effort. When the highly infectious novel coronavirus landed in New Mexico, prompting the state to shut down nonessential businesses and urge people to stay home, the weakness in Taos’ food supply chain was quickly apparent as store shelves emptied of basic goods every day for weeks.

“There have been rumblings in Taos County for years about reweaving the agriculture fabric of our communities that’s become full of holes over the last 20 to 30 years,” said Gillian Joyce, director of the nonprofit Alianza Agri-Cultura in Taos, which is focused on building a resilient agricultural economy and culture. “Coronavirus hitting really made people think about food insecurity and how to build redundancy into the system.”

What new farmers and livestock producers need to get started is often beyond their budgets — equipment and land.

That’s where LandLink New Mexico, a free service for farmers, landowners and farmworkers, comes in.

The Ortegas farm on family land, and Corilia Ortega has another plot of farmland in Ranchos de Taos. That access is critical to their foray into agriculture.

“We wouldn’t be able to be farming if we didn’t have property that family lent us,” Ortega said. “The money and capital you need just to start, it’s a lot. Just to buy seed. We don’t even own equipment. A lot of the ability to do our work is our neighbors giving us a really good deal.”

Ortega works for Alianza Agri-Cultura through a grant from the LOR Foundation to promote LandLink in Northern New Mexico.

LandLink New Mexico is a collaborative effort between the Agriculture Collaborative, New Mexico Farmers Market Association, Edible and other groups.

“It’s like Craigslist but for agriculture. You can post the land that you have that you want in production, whether it’s to protect your water rights or your ag land valuation. Or just because,” she said, sweeping her hand out across the field and the valley below — “look how beautiful it is.”

New farmers or those seeking to expand their operations can look for land that’s available to lease or barter for on the LandLink website, landlinknm.org.

“Land access is pretty challenging for anybody, but if you are a new farmer, it’s that much harder, if you aren’t inheriting a farm or ranch operation,” Ortega said.

Finally, LandLink has a spot where agricultural workers can post their skills and availability for people who need them. “If you have a tractor or disc [harrow], you can post that you have those,” she said. “It creates a little job market.”

Ortega has already mailed out 100 letters to landowners and has another 100 she’s ready to send, letting them know about LandLink. Plus, knowing not everyone has internet or computers, she’s made up 150 flyers to to put up at post offices, feed stores and markets.

“This leaves our ag tradition and lands at risk to being lost permanently to development,” Joyce said.

Tobias Martinez of Ranchos de Taos and Darlene Vigil, a former county assessor, who both now sit on the Alianza Agri-Cultura board, looked deeper at the issue and found it was complex. A slow defunding of agricultural extension, which provided services to farmers, and a loss of neighborhood support for agriculture all played into the problem, Joyce said.

“It’s as simple as who shows up for ditch cleanings, who can till fields, who shows up to help with harvest,” Joyce said. “That all used to be ditch-level and neighborhood-level help.”

Connecting landowners with people who want to work the land and use the water can help everyone.

One step at a time

Corilia Ortega came to farming after earning a master’s in clinical psychology and working for years in suicide and violence prevention, including launching a program at New Mexico Highlands University.

Her brother, an Army veteran, was accepted to a farmer apprenticeship program paid for through the New Mexico Acequia Association. He encouraged her to try it, and she did last year.

“That changed the trajectory of my life,” she said.

This year, she coaxed Stearns, who has a master’s degree in English, into trying the one-year program where apprentices learn about farm techniques, irrigation and water rights from farm veterans — the acequia association’s Los Sembradores program.

Ortega now works with LandLink and helped start the local chapter of the National Young Farmers Coalition along with Stearns and others. They are up to a dozen members from all over the county.

Agriculture isn’t easy. It’s a big commitment for all of them. They aren’t romantic about it. But they have friends like them who believe in this work and are willing to help.

“I think it is the way of the world that we are all going to be coming back to this,” she said.

“We’re fortunate that our family history and recent family memory of the land is still there. Our grandparents had farms and gardens and lived off the land. It’s those ripples of what it means to be from a small town that was once entirely independent and sustainable.”

This story first appeared in The Taos News, a sister publication of the Santa Fe New Mexican.

Northern New Mexico was once the breadbasket of New Mexico with over 300 small mills in operation around the state. In 1892 New Mexico brought 230 varieties of wheat to the Chicago World’s Fair.

Today most of our flours and grain products are derived from highly hybridized dwarf modern wheat, which is bred primarily for high yield at the expense of nutrition, flavor and biodiversity. It is grown primarily in the midwestern US and Saskatchewan and sold on the commodity markets. Modern wheat is highly dependent on chemical inputs and increasingly degrades human and soil health as well as farmers’ incomes.

A small group of farmers, gardeners, and bread bakers have organized under the name Rio Grande Grain and hope to bring our grains back to their roots. Since spring 2018, we have trialed small quantities of over 60 varieties heritage and ancient wheat, rye, and barley, in small plots near Alcalde. We have collected qualitative and quantitative data on each variety over four growing seasons and discovered a few that are strong performers in our unique high desert region. In fall 2019 we were able to move from trial quantities to seed-increase quantities of our top performing varieties—Kamut, Sonoran White, Einkorn, Emmer, Turkey Red, Red Fife, Spelt, and Marquis wheat; Rebel and Swiss Mountain rye; and Tibetan Purple barley. In another year we’ll have hundreds of pounds of seed that we can provide to small farmers who are ready to try a crop that supports regenerative agriculture principles and fetches a far higher price than commodity grain.

Farming in our region is different. Our fields are miniscule, compared to the vast fields in the upper Midwest. As farm families lost a generation or two to jobs in the city, many fields have been abandoned to disuse and colonization by stubborn Siberian elms.

Fortunately, the environmental movement and the locavore movement is beginning to reverse the decline of market farming and paving the way for locally-grown, heritage grains to return to our fields and our foods.

There are a number of steps involved, from creating a market (consumer and commercial) for the grains to producing enough product to serve that market; identifying the millers, malters, and brewers who can store, process, distribute these grains. We call it the grain chain because there are a lot of moving parts that are beginning gradually to fall into place.

Farm equipment is another issue. As we move beyond trial quantities of grain, hand harvesting, threshing, and cleaning is no longer an option. There used to be small combines (machines that both harvest and thresh the grain) that were suited to small fields. But those are no longer being manufactured in the US. We have a few small-scale combines in the state that have been imported from China. We are looking at equipment sharing to lessen the startup hurdle to a farmer wanting to experiment with growing grains. Technical support is another area we hope to offer to new growers.

Ironically, as many of us are eliminating gluten from our diets, biochemists are discovering that it’s the short-rise white flours of modern wheat, modern processing, and commercial baking that likely are the unhealthy culprits. Long-rise sourdough breads made from whole grains can actually be tolerated by many with wheat sensitivities and are thought to support healthy gut microbes. Home bakers are enthusiastic about counter-top stone mills that preserve the whole grain – bran, germ, and all—to bake up breads using long-rise sour-dough leavens that mitigate the gluten and are actually good tasting and good for our guts.

We are returning to our roots and learning together how to grow locally-adapted, climate-resilient, soil-supporting grain crops for our future in northern New Mexico. If you’d like to know more, contact riograndegrainnm@gmail.comand Instagram.com/riograndegrain.

Bio: Christine is a lifelong gardener, and since 2018, a sour-dough baker and grain grower.

Here is an article from Smithsonian in 2011 on the “new” heritage wheat trend that you might enjoy. It took the RGG team until we attended Grain School, UC Colorado Springs in January, 2018 to get on the bandwagon to start growing our own heritage grains.